Istrian interior of Linde Waber : Interior of the family with Anninka, Norbert, Clara, and Louis Alexis (named after the grandfather of Alexis the New-Born) Istvan (named after the father of Anninka), the 2-pronged candelabra : very gnarled knotted trembling, with snake arms, 2 melted down candles : wax or weak parts of white roses, 1 coffee mill, 1 gramophon (see Jacques Derrida) the joint of an orange-colored mirror on a chest of drawers, previously called Psyche, for which the pine tree as epiphany, 1 pot-roast secret message (casserole) on the coal stove, 1 rivulet of the kitchen, 1 sun devil in the window. Mixed technique, 2003 together with dedication, black frame, wafting, wafting away receding Sacre Coeur in the background, stroke of genius of the ENVELOPES with the black border of Georg Kierdorf-Traut, although no one dead, while I get dressed the black pantalons that strangle me on the wall of the room
24.6.09 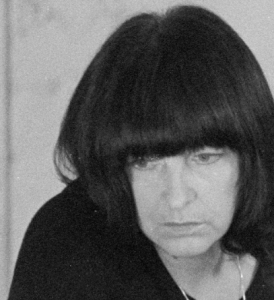