turn of the sun

turn of the summer sun

turn of the winter sun

turn of the year

turn of the century

head of the party

head of the country 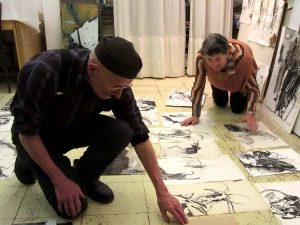 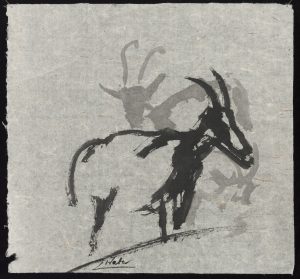 hind (ME for hinde, doe) 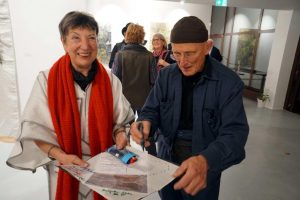 Both aspects of the emblematic tree characterize the person and the work of Linde Waber, namely concentration on the natural worls as well as nearness to people and readiness to help. Linde Waber approaches people openly and easily (which is not always the case among artists) and repeatedly lends her support to her colleagues; she highly values cooperative work. She energetically went to the ateliers and workrooms of many of her friends and acquaintances, drawing and paiting the specific work situation at the time, in great contrast to the prevalent individualism among artists. There emerged exhibitions and two thick catalogue books with those atelier drawings. Her work was not limited to visual artists, but rather interdisciplinary, including architects, musicians, writers, filmmakers and all-around artists primarily from Vienna and the Austrian regions. That culminated in a large exhibition in the Vienna Kuenstlerhaus 2003 and in the volume GENIUS LOCI (Mandelbraum-Verlag 2003).

In addition, the artist has for years maintained a daily discipline whereby she works day-by-day, sometimes only late at night or the first thing in morning, often however with the participation of friends and acquaintances (“did you sign yet?”) as well as incorporation of items received in the mail to produce a so-called  DAILY DRAWING. She has thus already started a private archive of inestimable value, parts of which, filling entire walls, were to be seen in the regional museum in Linz as well as in the Augarten Atelier. 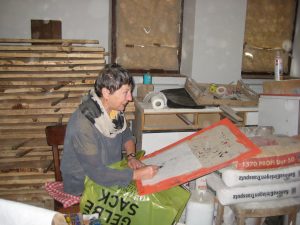 Wherever she may be—in the country, in cities, overseas or up in the mountains–Linde Waber draws and sketches with an energy and naturalness that amazes not only her travel companions and the children that may perchance have entered the scene: even the dynamically horned spotted goats of last summer’s alpine pasture at Dachstein seemed to be perplexed at how quickly and accurately Linde’s paintbrush captured their ever-so capricious features on Japanese paper, in natural light, of course, even though separated by an artificial fence from the creatures that don’t restrain themselves, who even after 11 stolen bites a day still are not able to give up their search for edible items.

In seemingly unusual limitation for the artist, whose years of apprenticeship in Japan continue to have n lasting effect, she annually goes into the seclusion of her garden in the town of Zwettl (which name has to be with the Slavic “zviatlo: the clearing” [open space], and there she not only holds summer classes for interested lay-perons, but she has  also dedicated herself year-in and year-out for decades to the vegetation of her home in the Waldviertel. Investigations have been conducted from an art historic perspective to determine on the basis of examples, in what unbroken tradition of old-Austrian landscape painting of Pettenkofen, Rudolf Ribarz, Ermil Jakob Schindler and others the indefatigable (tireless) contemporary artist stands with her Cabbage- and Turnip-painting.

.In that regard it is not only the extent of her nature studies but also the range of what is portrayed immense: nearby vegetables and mid-range landscape and mid-range landscape excerpts compete with the square of the picture – or rectangular and to some extent aware of its limitations – a continual battle that seems from time to time to result in favor of the vegetation.  With all the overly extravagance and gesticulation in Linde Waber’s mode of presentation, the pages and pictures yet contain something hidden, discrete, secretive, which, for example, again and again delights her poet friend Friederike Mayroeker and inspires to no less secretive poetic commentary something in the large format of the woodcut—text—photo volume AN DER WIEN (Gaussplatz-11-Verlag, 1997).

The most recent pictures by the artist evince a more permissive dealing with the presentational means of her artistry, and that seems to drive the enigmatic interpretation of nature to an extreme (“everything in the garden”). With that we can possibly break through to the effervescent dynamic of various aquatic undersee images with, at the same time, a clear upward look to the presumable surface of the water (as if she painted under the water while snorkeling, which would not be unlike her), or the image of a compartmental coral reef like a standing blood fountain centrally sticking out, offering itself for extended reflection. All of these surfaces and depths of the picture space are, by the way, nonspeculatively  rubbed to incorporate sand from various provenance.

The artist pursues her Japanese affinities (“little Japanscrap”)  primarily in wood cuts and water color drawings but also as a painter, suspended in wabering dynamic, whereby the stems (stalks) of waving pieces of paper can be removed like a wish list in the context of Shinto Temples, and one could from a distance even be reminded of those multiply folded strips of paper as they are made by priests and placed in reliques for the arrival of the spirits, or on the diamond-shaped folded gift-wrapping paper by the name of NOSHI,

Someone told me recently about his visit to the Art History Museum in Vienna where he spent an entire hour in front of Jan Vermeer van Delfts’ picture THE ART OF PAINTING (with its not unproblematic provenance), a painter who works extremely form-consciously and allegorical: I would like to wish the visitors of the exhibition of  Linde Waber (who seems to work from extremely from painting gesture, color theory and subconscious drives)., that he or she find occasion and leisure in a similarly intensive manner to enter the only apparently chaotic picture worlf of the artist and its most intimate secrets

(fragrant) Linden flower You have certainly seen: when the ripe multiple fruits of the linden fall, the top lead functions as a flying mechanism for the nut-like fruits, so that they slowly with a turning motion and possibly cared by the wind fall to the graound as a kind of dancing doll)