Vegetational – Even the Archive

“Waber vegetativ”, the exhibition title thought up by Bodo Hell, has already become a defining term for the art of Linde Waber. The notion of abundant growth from within lush vegetation aptly reflects Waber’s intuitive approach to her work and her uniquely dynamic, nature-inspired style elements. Her paintings and drawings exhibit organic growth and ever-changing nature. Vegetation, sprouting wildly, blossoming, growing, absorbing any foreign matter, seems to burst out beyond the confines of her canvases. She captures what jumps out at her, a particular point, a patch of light, a smudge of colour, a leaf, and from this focus she develops the rest of the picture. 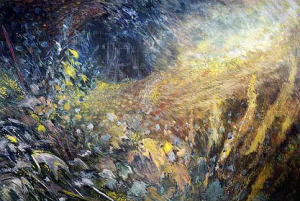 Her studio, also her archive, is just as organically vegetational. The accumulated sheets defy the conceptual restrictions of alphabetical sorting, just as they defy the physical restrictions of the binders they inhabit. Invitations to exhibitions, long since concluded, grow out of their boxes. Many bowls overflow with pencils, brushes, dip pens, colour pencils, and felt-tip pens (especially the thick ones in red, Linde-Waber-red). The many books, often with personal dedications from the authors, fight for space on the shelves. The kitchen walls, and even the ceiling,  are plastered with posters announcing her exhibitions. Pictures by her friends and colleagues cover the walls and ceilings of her labyrinthine live-in studio space. Linde Waber is a collector; emptiness and stillness are foreign to her, have no place in the essence of her approach to art and to life. She lives and creates out of abundance, out of intensity, and she transfers this vigor to her surroundings.

The objects in her space gain a life of their own, establish connections with each other, explain and complement one another, tell their own stories – archival stories. A relationship forms between the “Atelierzeichnungen”*, the books and catalogs in Linde’s library, her art collection, the “Tageszeichnungen”**, and the binders with archived letters, texts, photos, projects, lists, bills, collected news clippings, and invitations. Key words, quickly jotted down, outline her life’s topics, interests, friends. Even out of the binders with “completed projects” something new can sprout at any moment. Notes, stuck with adhesive tape to door frames, doors, and shelves, are crucially important, and cannot be moved or discarded. Her surroundings visualize the web of relationships out of which Linde’s life and art grow.

The course of Linde Waber’s life is closely intertwined with the course of her art. The poet Rainer Pichler fittingly calls Linde’s art “the map of her life”. Her inspiration, her entire body of work grows directly out of the totality of her life experiences.  It’s not surprising that she moved from the penthouse apartment, making room for her daughter’s growing family, directly into the studio space below, which is now flowing over with even more books, furniture, paintings, and carpets.

Only the large table in her studio gets emptied completely, frequently, but only for a short time, to be laden with wine, bread, cheese from France, blood pudding from the Waldviertel***, vegetables, and the famous berries from Linde’s garden. Ten chairs of mixed styles, some painted, stand around the table, but many more people find space when working out the concepts for a new book or exhibition, materializing an idea or a dream. Many of the “Tageszeichnungen” point to such gatherings. Linde Waber is a collector of moments, inspired by Caerus, the embodiment of favorable opportunity and the right moment in Greek mythology, she brings together people and ideas.

She also recognizes the impermanence of life and of objects, the ambivalence between archiving and discarding, between holding on and letting go. In her collection of “Tageszeichnungen” a creative hodgepodge grows out of social contacts, meetings, conversations, memories, work in the form of notes, scribbles, and sketches on napkins, invitations, letters, photos, clippings, and dedications – all of which are incorporated into the daily drawing. Much that does not find it’s place in the larger archive of her studio space is stored or documented here. This project of daily drawings builds an artist’s archive of a very special kind, one that enables innumerable stories and vantage points.

She captures cheerful moments, with her art in the daily drawings, and in the photos posted all over the studio. Difficult, heavy moments are captured in the canvas of her life. Linde often speaks of the close connection that exists between her and her surroundings. This connection is so palpable in her live-in studio that the very rooms themselves have an unbelievable vivacity, a wild flourish.

Footnotes (should be included in the book)

* “Atelierzeichnungen” are a long series of drawings in which Linde captures the studios and workspaces of artists with whom she has a personal connection. A selection of these drawings were presented in the “Genius Loci” exhibition (Künstlerhaus Wien, 2003) and accompanying book (Mandelbaum Verlag, 2003).

** “Tageszeichnungen” are another long series of drawings, to which Linde contributes a single daily addition, capturing some highlight of the day, for more than 18 years. These daily drawings are done on Japanese Washi paper, 35 cm by 35 cm, 365 sheets a year, more than 6000 sheets in 18 years, adding up to about 10 loosely stacked centimeters in a square card board box for each year.

*** The Waldviertel is the northwestern part of the province of Lower Austria. Linde Waber was born in Zwettl, one of the larger towns of the Waldviertel.